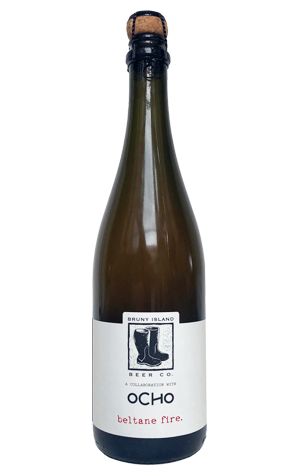 Drinking beers from either one of Bruny Island Beer Co or Ocho can be educational, whether it's through the use of unusual ingredients or the story being told. Here, this collaboration between the Tasmanian duo offers a little of both, with buckwheat and wine yeast making an appearance and the name a reference to a Celtic celebration of the changing of the seasons held midway between the spring equinox and summer solstice.

The beer itself is an attempt to obtain an "outrageous tropical fruit flavour and aroma" as well as a nuttiness from the buckwheat. Along the way, they double dry-hopped with Tassie Galaxy hops and also used two yeast strains, one from the wine world and a strain of Brett known to offer up soft funk as well as plenty of tropical fruit characters.

As with all Bruny Island beers, it's bottle conditioned and will evolve, with time likely to be a friend to the highly carbonated Beltane Fire. For, while there were some juicy fruits within the bottle we sampled, there's also plenty of characters more in common with the bonfires lit during Beltane celebrations: a potent dry, woodiness, some smoke and a herbal quality. There was a distinct pongy whiff to the aroma too, as found in some beers inhabiting the funkier realms of the farmhouse world, suggesting the yeasts are still working things out in a beer reminiscent in its Bretty aggression of last year's Saison D'Entrecasteaux.