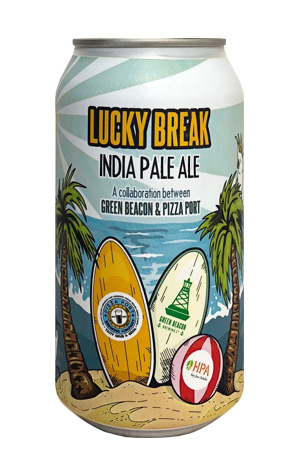 Early in 2018, Green Beacon head brewer Johann van der Walt and general manager Chris Borbas took a trip to California. Their main aim was to do some research around yeast and visit the home of Premier Stainless Systems, the company that built their breweries. But, as you do, they smuggled a couple of suitcases worth of Aussie hops in with them just in case.

That's the start of the tale that has led to the release of Lucky Break, but the beer's name came about from what followed. The guy who'd commissioned Green Beacon's production facility was good mates with the team at San Diego's legendary Pizza Port string of brewpubs and arranged a hook up. A little while later, on Johann's birthday, the two breweries used those Aussie hops to create a West Coast IPA together. The initial beer was poured at Pizza Port's venues and, months later, the collaboration came to Queensland as Johann and his team looked to recreate the recipe back home.

The beer – some of which has already been air-freighted to the Pizza Port crew – is designed as a showcase for Vic Secret, Enigma and experimental variety HPA-033 and pours a hazy pale gold with a fluffy, white head. There's some sticky citrus, pineapple and paw paw set against a malt base that's a little sweeter and fuller than the driest beers of the style.

As for the finish, over to Mike, head brewer at the Pizza Port in Carlsbad, who sent the following feedback: "I loved that you guys perfectly balanced the 033. I love the fruity aroma and the slight minty, dry finish. Perfectly executed."