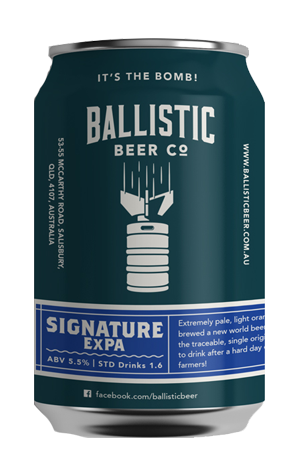 When we’ve gone a while without a beer, we talk about being parched and breaking the drought. But here’s a beer that really aims to help with drought.

Ballistic Beer is an Australian brewery. Bintani is an Australian grain supplier. They both know the importance of Australian agriculture, and they’re both keen to help out rural communities and struggling farmers when the going’s tough. That’s why Mitch Bradey from Bintani and Lachy Crothers from Ballistic got together to brew the Signature ExPA, using traceable, single origin Joe White Signature Malt from Northern NSW.

Together, they donated $2,000 to Buy A Bale, a charity campaign that helps Aussie farmers feed their livestock. That’s 20 bales right there. On top of this, they launched the beer at both the Salisbury brewery and their West End venue, each with a Karma Keg – pay what you like for a beer and all proceeds go straight to Buy A Bale.

The result is a malty beauty, distinct from the hop forward XPAs that are in vogue at the moment. The Signature malt is extremely pale, and it shows: the beer is pale as a golden bale of hay, and clear as the sky over Northern NSW in the midday heat. The smooth sweetness of the malt brings back memories of sucking on a ten cent toffee from the school fête, without overwhelming the taste buds. The sweetness then eases off as the beer finishes semi-dry, with bready and biscuity flavours taking over.

It’s easy to drink, and easy to support two businesses who are supporting farmers. Good for when you’re parched.