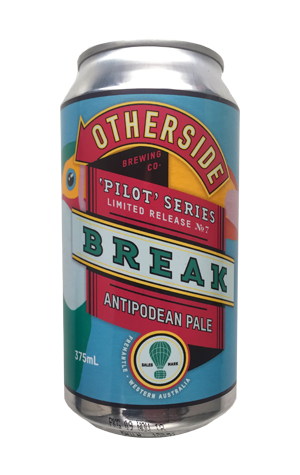 A tipping point has arrived at Otherside. For the past 18 months, their brewery has come together and, as the brewers have got to grip with it, the momentum gathered through a steady stream of beers is becoming instead a torrent of releases through Otherside’s various handles. The latest in the Pilot Series is a tropically inspired pale ale and, although it’s a limited release, one imagines this could very well end up in the core range.

Pouring golden and with a subtle orange-tinged haze, Break soon fills the nose with pineapple and peach aromas. This fruity affair continues in the glass and is joined by an understated lime character that runs through the XPA-like body to Otherside’s signature gripping, dry finish.

This is very much a beer to be drunk rather than thunk and local artist Chloe Wilder capitalises on this with suitably summery toucan artwork that keeps the can feeling fresh and relaxed.