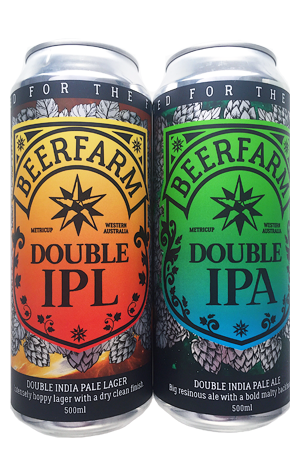 The Beerfarm is celebrating its third birthday with a couple of doubles in the shape of supersized versions of its most popular beers. It’s a confident move to play around with the India Pale Lager (IPL) in particular, given it's a beer that arrived as an instant classic, however, the beerfarmers do like a party and there is a lot to celebrate.

Although still light on its feet, the IPL arrives with more weight and alcohol sweetness than the original. This seems obvious given the light malt body, yet the spritzy carbonation helps retain overall balance and supports the dry finish which, in a blind tasting, may even considered to be Brut-ish.

The opposite is true of its sibling with the heavily caramel and toffee malt-leaning Double IPA gripping on to the increased booze with enthusiasm. The Moteuka hop’s mojito lime characters have more to room to express themselves within this bigger beast, while its resinous qualities are more prominent than the original too.

And other good beer retailers across WA