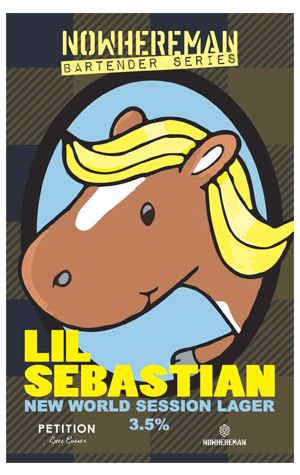 Made in collaboration with Petition Beer Corner for their epic Collabosaurus WA Beer Week event, Lil Sebastian’s heart belongs to a tiny horse from the comedy series, Parks and Recreation. The venue’s team member Laura Thomas suggested the name with the miniature beer in mind, however the result is a something of grander stature as a result of the second in the Nowhereman Bartender Collab series.

Idaho 7 hops were used throughout the New World beer, yet six weeks of lagering shows old school techniques are at play too. It pours the palest straw with a fine bead, while melon and spice show with hints of Earl Grey tea completing the picture.

Read about the Collabosaurus here