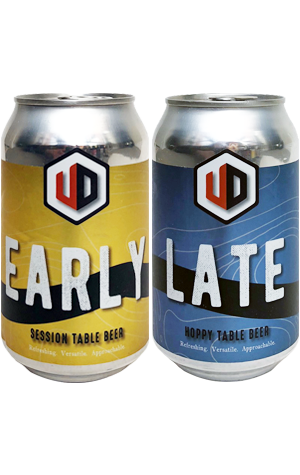 Use of the term Table Beer is becoming increasingly common among Australian brewers. As with many terms plucked from history – such as farmhouse ale with its origins in the same region of the world – it's a pretty broad church, taking in typically lower alcohol beers once served from jugs with a meal. But, given table beer's origins in parts of France and Belgium, those created locally tend to take inspiration from there too, often using farmhouse yeast strains and favouring malt and yeast-derived qualities over anything overtly hoppy.

Van Dieman has been moving steadily towards farmhouse style beers in recent years; it's based on a family farm outside Launceston, grows its own barley and hops and has been developing a series of estate ales, so it's a direction that makes sense. And now it has a couple of table beers as part of its core lineup.

Early is the baby of the two, designed as "the perfect beer to pour around the family table at lunch" and weighing in at just 3 percent ABV. There's rolled oats and raw spelt in the mix, along with Celeia, Motueka and Strisselspalt hops, with the former contributing a surprisingly creamy body for a beer of such stature in which there's plenty going on. It pours a cloudy straw colour with a loose, foamy head, offers up banana, bubblegum and floral aromas alongside a soft, honeyish malt sweetness and a slightly sharp herbal finish.

As for Late, it uses the same grains and saison yeast, but is half as big again and opts for more tropical hops in El Dorado and Enigma. It's as feisty a pour as Early and still possesses some distinct farmhouse characters, albeit coming across as leaner and more herbal and spicy. There's a potent drying, lingering bitterness running through the middle and some flavours reminiscent of hay in what's a more aggressive beer than its smaller sibling.