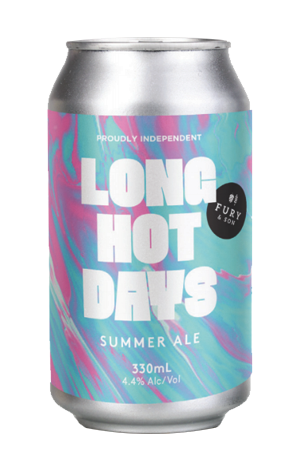 For their 2017/18 summer seasonal, Fury & Son put out the mid-strength Citra Sour. A year on, as every man and his dog looks to release some sort of lower ABV fruity sour, the Keilor Park team has decided to follow a more traditional path with a water, malt, hops and yeast summer ale. So, while the cans are funky to look at, what's inside is rather more straightforward.

It's tagged a "hoppy kolsch" and, while there are some ripe tropical fruits at play, there's a pretty full, bready, biscuity sweet side too, as well as what appear to be yeast-derived esters adding their own form of fruitiness to the mix and a bitterness that takes its time but arrives in the end, like a southerly change bringing cool relief at the end of a long, hot day.