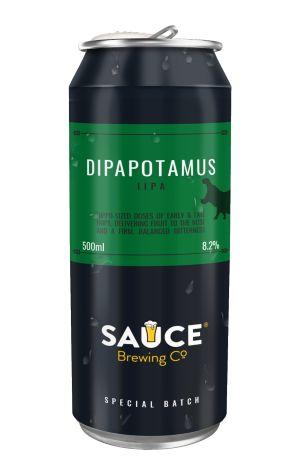 It could be that the most notable thing about the new double IPA from Sauce Brewing is that there’s really nothing unusual about it. Indeed, it brings to mind a comparatively quaint time within the Aussie craft beer boom, before all the haze and the fruity sours, when the default way for a brewer to make an impact with drinkers was to concoct some sort of IPA recipe then throw as many hops as possible at it.

And that’s pretty much what they’ve done here as DIPApotamus is the hoppiest beer to have come from the Sauce brewery to date. The whirlpool yawned and they just stuffed the thing full. Given the beer takes its inspiration from the West Coast of the USA, it duly uses a truckload of American hops to give it an upfront citrus fruit character and strong bitter finish that’s flush with pine and chewy resin. And, while hops are the defining feature, things are kept in balance by a good strong layering of malt.

At 8.2 percent ABV, DIPApotamus is an unapologetically robust beer. Crack a can or two and prepare to wallow.