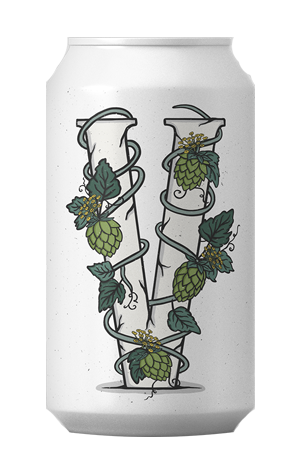 Newstead Brewing, Brewski, and The Mill on Constance reached five years of operating as 2018 was drawing to a close, and a big part of the birthday celebrations was a trio of collaboration brews and events. You can read more about it and their thoughts on the Brisbane beer scene here.

In five years, they’ve caused plenty of mischief together so it’s only fitting they’d occasionally brew some beer together to make up for it.

V - Brewski is a ruby grapefruit grisette, weighing in at 4.5 percent ABV and 15 IBU. The cloudy lemon colour, the rapidly dissipating head, the gentle yeasty aroma… all of these point to a pleasantly refreshing grisette, but they don’t give you the full story. While there are subtle hints of citrus in the aroma, it’s only when you taste the beer that the ruby grapefruit comes alive. The citrus sparkles and sizzles on the tongue alongside the Belgian yeast, waking up the palate and brightening the eyes. It somehow manages to hit "light and refreshing" and "full of flavour" in every swig.

Meanwhile, V - The Mill on Constance is a Turkish Delight Dark Ale at 5.5 percent ABV and 20 IBU that's an interesting little treat worth selling out your family for. (That’s a Narnia reference, for those playing at home.) A soft aroma of roses gives you an expectation as to what the flavour will be, but then the first sip is a smooth body of roasty malt with a hint of chocolate. But here’s the kicker – that rosy aroma keeps filling your mouth, upper palate, nose… anywhere it can get to. It’s actually pretty easy-going for a dark beer, too, so it still works well in the heat.

Last, but not least, is V - Newstead, the host brewery's Spiced Double Red Ale. It's the biggest of the trio – 7.5 percent ABV and 65 IBU – and, in true Newstead fashion, the weirdest of the three. It pours a deep red, but don’t expect a straight red ale. An expansive malt canvas is just the beginning – it’s spattered with earthiness, pepperiness, cinnamon and a complexity of botanical flavours that has you wondering if it’s a gin, a curry, a fruit cake, or a herb garden. It’s none of these things, and it’s all of them. (That’s the postmodern thing to say, right?)