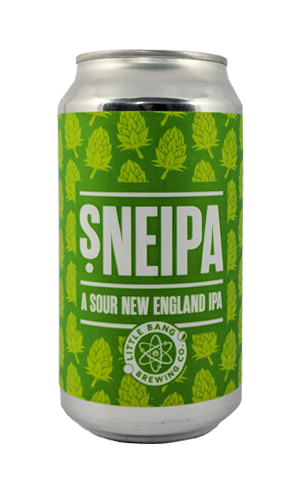 Having been invited to brew a new beer for Carwyn Cellars' 2018 Canvent Calendar, the Little Bang crew figured they needed to stand out from the crowd, because, let’s be honest, the calendar was always likely to feature a fair whack of NEIPAS. So, for their entry, two styles converge, with the ubiquitous NEIPA colliding with a sour base beer. According to head brewer Fil Kemp: “There is a lot going on in there,” and he's right, with the sNEIPA messing with the drinker’s mind… and taste buds.

In the glass, the sNEIPA looks like many other IPAs, burnt orange in colour, with a slightly off white head, but that's as close to the IPA style guidelines as this one goes. The sour side is evident on the nose, as a slightly acidic twang reaches out from amid smattering of juicy hops. The same combo mingles again on the palate, with a citrus, pithy hop blast that explodes into an late-hitting sourness. The latter doesn’t leave the mouth in a pucker but instead matches the juiciness and rounds out the mouthfeel, before it all finishes up with a soft dryness.