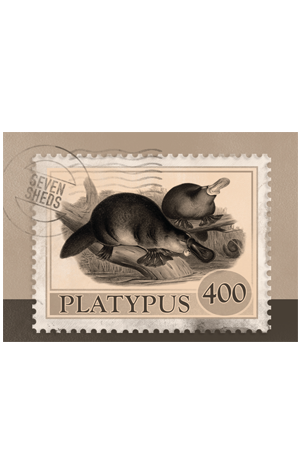 Willie Simpson has been around the blocks of the beer world, both as a beer writer and brewer, but more than ten years into his tenure at the helm of Seven Sheds, there still seems to be plenty of inspiration out there.

Celebrating another milestone – the 400th batch of Seven Sheds beer – he's released the Platypus 400, a dark brown ale, loaded up with a labyrinth of malt varieties and combined with locally-sourced ingredients from Willie’s neighbours in Tasmania’s north-west: organic buckwheat and hemp seeds.

Seven Sheds have released several other anniversary beers under the guise of the platypus, an animal that is notorious for being a bit of a quirk of nature. The complex flavour profile – an octuplet of malts, and the nutty and oily notes of those exotic ingredients – are not quite as bizarre as the monotreme mentioned, but the Platypus 400 is as smooth on the palate as the platypus in your local creek. Perhaps that’s the analogy.

Just 666 750ml bottles were packaged off, with Seven Sheds’ tasting room in Railton the best place to find one.