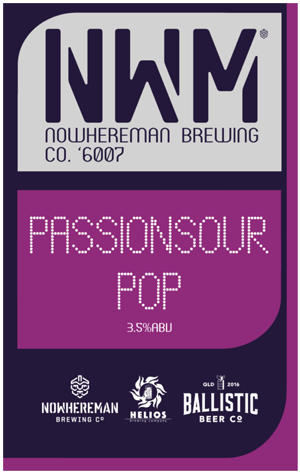 WA Beer Week provided a rare opportunity for former colleagues to catch up and share a beer. While they were at it, they thought it might be worth making a beer, given they all met while working at Gage Roads many years previously. So, Charlie Hodgson (Helios), Lachy Crowthers (Ballistic) and Eddie Still gathered around Nowhereman’s whirlpool to create a sessionable summer sour, something that would suit the humid Queensland weather as much as the dry Perth heat.

Riffing on the familiar flavoured sparkling wine, but with far more elegance, PassionSour Pop is unmistakably passionfruit driven; 100 kilograms of passionfruit pulp was added to the 1,800 litre batch and, while the effect is obvious, it’s also balanced and eschews any lolly-like characters. Acidity follows a similar path, being at once bright and also enjoyable, leaving PassionSour Pop a very welcoming summer crusher that’s worth sharing with mates, especially if they happen to be in town.