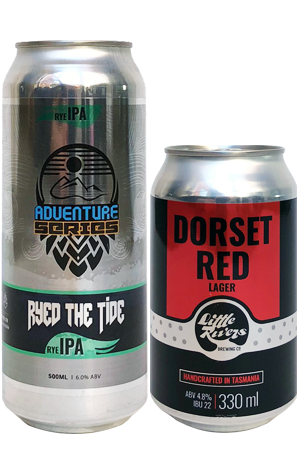 They're fans of the outdoor life at Little Rivers in Tasmania's north-east and, rather appropriately, have put a couple of limited release beers into cans as the summer holidays approach. One sits roughly in the realm of a NEIPA – or East Coast IPA, as the brewers prefer – but comes with added rye alongside the Galaxy, Mosaic and Kohatu hops. It's Ryed The Tide and, with some caramel malts in there alongside the rye, it's a maltier affair than most of the hazy IPAs you'll have come across. You'll find ripe tropical fruits, particularly mango, but there's a full, quite rich maltiness at play too.

As for Dorset Red, it's a darker spin on their core range Dorset Lager. Sitting in Vienna lager territory, the specialty malts lead the way, keep things going in the peloton and bring up the rear too, covering bases from biscuity through to toffee – almost treacle – territory, making it the sort of beer you rarely see in these hop, fruit and acid-driven days.