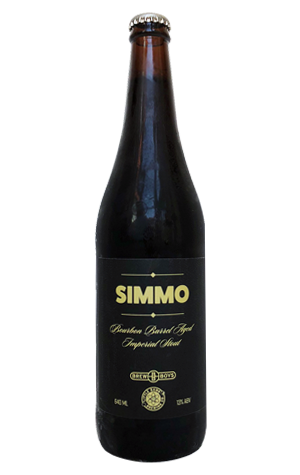 Last year, a decade after launching Brewboys – running it pretty much solo for eight of those years – Simon Sellick decided it was time to hand over the reins to new owners. Prior to announcing his decision, he laid down a final brew with one of the people he'd mentored, Fil Kemp of Little Bang. And now, many months and time inside bourbon barrels later, that beast – named, appropriately enough, Simmo – has been released. And, appropriately enough for a man who was knocking out high ABV smoky Scotch ales and hopped up IPAs before most, it's a big beer too.

Simmo (the beer, not the man, who Little Bang describe on the label as "a friend and mentor, like our own Mr Miyagi, but with more swearing") is a 13 percent ABV imperial stout, yet it presents less fiercely than one might expect. For a start, it pours a dark brown through which light can penetrate rather than being of the old engine oil variety. And the various elements are there without being overpowering too: a touch of bourbon, some vanilla sweetness, a little roast, some dark fruits. For the most part, however, it's chocolate leading the way, although the impact of the bourbon builds over time too.

Given it's a sign-off between mates, final word goes to Fil and Ryan: "A fitting tribute to the man, the myth, the enigma. A bit rough around the edges, but deep down such a class act, and undeniably a true original."