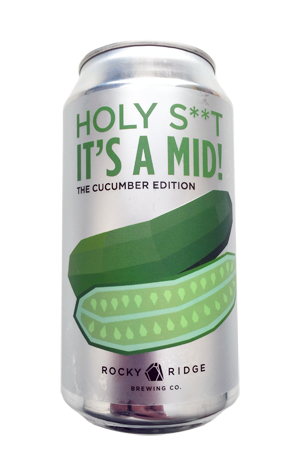 “I hope you like cucumber,” Hamish Coates says mischievously, at the exact moment his new beer hits my lips. It’s a question that drinkers should probably consider before drinking as the fruit flavour is undeniable. The explanation for this is explained in a further droll quip when noting that around ten percent of the beer’s final volume is cucumber because “we were worried that the cucumber would get lost”; he needn’t have been concerned.

By now the Rocky Ridge gose base has been refined into a fine vehicle for the whatever the addition of choice might be but what’s curious here is the shift in final beer. The mouthfeel feels fuller than recent fruit explorations and perhaps the restrained perceived salinity is the most interesting. “Perceived’ is an important point because the base recipe remains unchanged, yet the overall impression is more cohesive than the Mandarin edition. So, if you can answer Hamish’s question with a firm: "Yes!" and immediately have thoughts involving a side of gin, this may well keep you cool as the proverbial this summer.