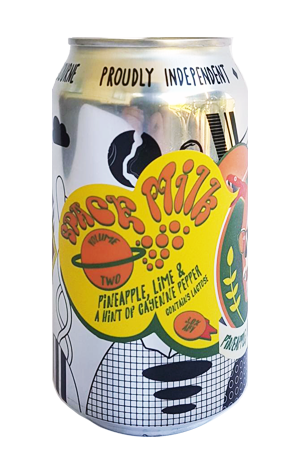 Bodriggy’s Space Milk cans promise to offer a glimpse into the expanse beyond our own planet, while the beers that sit inside set out on a journey into the world of lactose-laced sour beers. The first in the series showcased cascara, the dried skins of coffee cherries, and wild Australian raspberries and here Volume 2 has combined what is quite possibly an even more disparate collection of flavours.

Pineapple and lime may sound normal enough for an Australian mid-strength sour. But add in some cayenne pepper? Somewhat less so. As ludicrous a combination as a lactose-sour-pineapple-lime beer might sound, it does all come together. The lime and pineapple join forces in a zesty, cordial-like tropical tang and the cayenne pepper adds a spice that instantly brings to mind a dry ginger beer. And, while that smooth mouthfeel (or fluffiness, to use Bodriggy’s words) often associated with the addition of lactose is present, there’s no real sweetness at play; instead, that peppery spice only seems to build as the liquid inside your glass disappears.

If you want more, here’s a video the brewery made for the beer’s intergalactic launch.