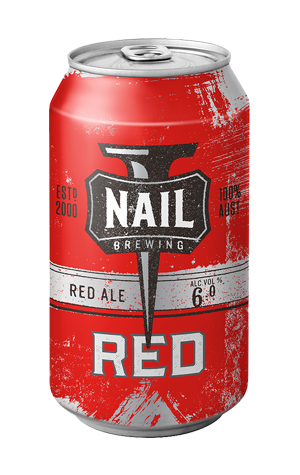 Originally released in late winter 2014, the benefit of hindsight now sees Nail Red as something of a watershed moment for John Stallwood and co at Nail. The Bassendean brewery’s trophy cabinet was already bulging with accolades from its first near fifteen years of operation but the market had by that stage shifted beyond the sort of beer's upon which that success was built. Lupulin fever was now gripping brewers and drinkers alike, pushing the threshold of what was considered a hoppy beer, while Black IPA’s short epoch was beginning to wane.

So, as a brewer well into your second decade of fermentation, what do you do? Chase the next big thing? Ignore everything and carry on? Cry out to the beer gods for guidance?

For "Spesh" the answer serendipitously arrived through a series of limited releases, each dedicated to an individual that had helped him with his journey, in this case the late Maurice Brockwell who was instrumental in the original Nail brewery. Presciently labelled then as being double dry-hopped, Nail Red took off and soon became part of the core range. From this point Nail have continued to find the just the right beer, at just the right moment, most notably VPA and MVP – and all without an IPA in the portfolio!

With this new packaged release, Nail Red fans will be pleased that the now familiar caramel and toffee malt, hoppy orange citrus, supportive booze and balanced presence is, finally, in cans.

Launched first in WA then heading across Australia from early 2019