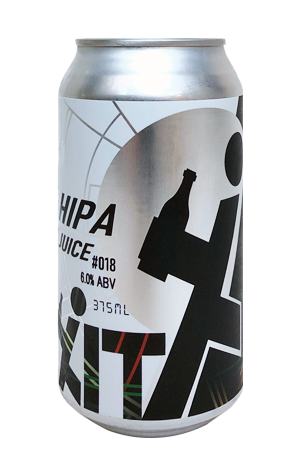 Exit Brewing have put out many a hoppy beer in their time, from the Pale and IPA in their core range to all manner of limited releases: West Coast IPA, imperial IPAs, a red IPA, a gluten reduced pale... you get the message. And it's to that realm they return for their first packaged limited release of 2019, but with added haze.

HIPA Juice (the H standing for Hazy) is a "very highly/ late hopped beer", according to brewer Grum, and one assumes it's the work of all those late hop additions that give the beer its deep yet clean haze (if that's not an oxymoron) as there's no floaties to be found here. Instead, you've got something the hue of a freshly squeezed grapefruit or pear juice (without the bits) with aromas that sit in tropical fruit, with a dash of Jaffa orange, territory.

While the official IBU count is in single figures, HIPA retains a fair bit of grip on the palate, albeit a grip that's more akin to biting into a tart citrus fruit than traditional beery bitterness. It's a finish that makes the beer more of an IPA (as they once were) than many of its softer, fluffier peers.