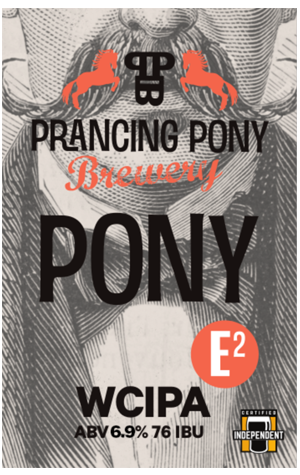 While it's unlikely anyone would accuse the Prancing Pony crew of being one trick ponies, given the diversity of beers they've released over the years, there is one trick they're happy to repeat. And it comes in the shape of a West Coast IPA. The first time they performed it was in the shape of E1, a beer poured at a very select collection of venues around Adelaide in order to gain some feedback. After a few tweaks and improvements to the recipe, the second release has been launched on a larger scale under the E2 banner.

The 6.9 percent ABV IPA pours golden in colour with a slight haze and bright white head. The balance between heavy-hitting hops, sweet, light malts and bitterness leans towards the hoppy side of things, albeit without a serious bitterness. Some sweet bready malts work together with tropical aromas and flavours of grapefruit, apricot and pineapple in a beer that's soft on the palate, medium to full bodied, and wrapped up with just a touch of dryness.