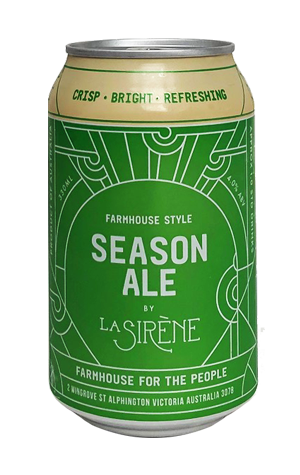 For their third can release, Season Ale, Melbourne-based urban farmhouse brewery La Sirène have arguably opted for a more traditional approach than with the beer's predecessors. While Urban Pale saw Costa Nikias and his team bring a heap of hops to the hazy farmhouse party and, in Citray Sour, combine the juiciest of fresh oranges with a delightfully refreshing acidity, here you've got something more akin to the saisons upon which the brewery first made its name.

When it first appeared in March 2019, you'd pick up some of the characteristics delivered with more potency in the brewery's core Saison, just dialled down to one-standard-drink-per-gorgeous-green-can levels, plus some soft lime curd, melon and passionfruit aromas.

As summer 2020 kicked into gear, however, they decided to revisit the beer. In a tradition that can be traced back to their run of limited release, keg-only single hop saisons, they decided to significantly up the hopping rate. Thus you're now met by a broader, pillowy cloud of fruit aromas, the lime and citrus joined by a distinct grapefruit component. With the hops added late in the piece, however, and the beer remaining at just 4 percent ABV, what lies underneath remains light-footed and low in bitterness – comfortably in session ale territory with hints of the brewery's signature farmhouse character.