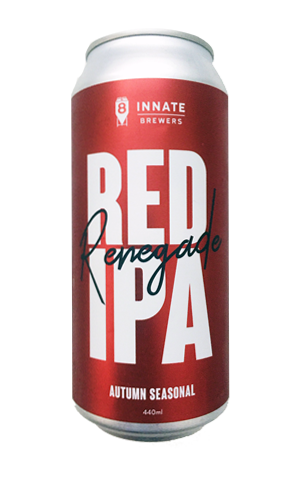 Innate’s autumn seasonal returns entirely refreshed and now smartly packaged in 440ml cans. Although the Western Australian days still hover in the low 30s, the beer's rapturous ride of caramel and biscuity malts soon lure the drinker into thoughts of cooler evenings contemplating the passing seasons... Wait a minute, it's a red IPA we're dealing with here, not metaphysics! That said, the switch to Maris Otter malt, and the way in which Renegade has improved from last year, is worthy of a little reverence, thank you very much.

The classic English malt has a presence that provides the sort of rich, round malt body frequently sought after by brewers and drinkers alike. Paired here with Caramalt, Dark Crystal and roasted barley, this year’s iteration possesses a luscious, almost creamy base upon which a mix of Simcoe and Vic Secret hops can work their magic. In Renegade’s case, the influence of orange, tropical licks and subtle pine swirls in a cohesive expression - even the now 65 IBUs feel balanced.

The final sway of lupulin nuance and increased booze evokes a spiced orange element that ebbs through the very dry finish. It really is something worth contemplating over another sip while pondering the eternal mystery: should I open another can or not?