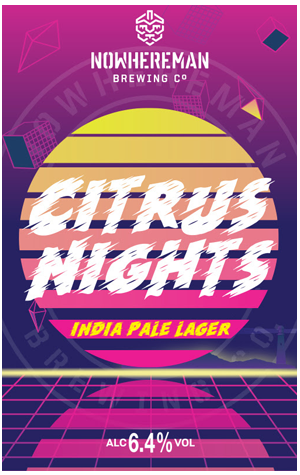 Citrus Nights is a liquid love letter to the last of the warm summer evenings, an autumn release that looks longingly back at the time spent at the beach and outdoors in a warm defiance of the reality that cooler months are coming. For Nowhereman, they've looked to capture that fading radiance via this grapefruit-infused India Pale Lager.

The bright sunshine glow from the glass may well be a result of the eight weeks the beer spent lagering in tank during the peak of summer, while the time taken over it has also imparted a suitably spritzy carbonation, one which lifts the massive ruby grapefruit on the nose. Peel bitterness weaves its way through the beer's clear length alongside the citrusy Idaho 7 and Columbus hops, while there’s a little weight thanks to the 6.4 percent booze content – enough of a punch to suggest summer may be over but we can still have a little fun.

More to be announced via social media