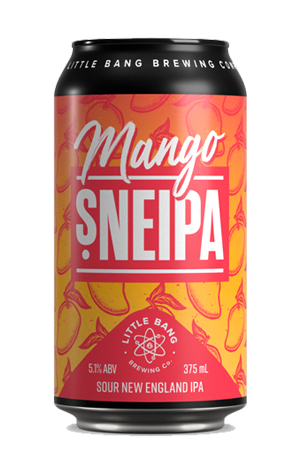 Little Bang Brewing sent their first sNEIPA into the world as part of the 2018 Carwyn Cellars’ Canvent calendar and many were surprised it was the first time the largely traditionalist brewery attempted such an historic style. Wait, that doesn’t sound right … hold on, what even is a sNEIPA?

Put simply, it’s the intersection where two increasingly popular craft beer styles meet: take a kettle soured beer and introduce it to a New England IPA. And there you'll find a sNEIPA.

For the brewery’s latest attempt at the beer, they've taken an already tangy and hop-forward beer and pushed it a step further into tropical territory by adding mango. It’s a beer that’s creamy and delivers big flavours of citrus juice from the hops before an acidic tartness takes over the palate. And, of course, it’s also layered with flavours of fresh mango.

It’s a refreshing beer, particularly if it’s the first one you try immediately after taking one of Brisbane’s Lime Scooters to host a tasting event with the brewery’s founders, Fil Kemp and Ryan Davidson. Particularly if your scooter breaks down on the way there and you’re already running late…