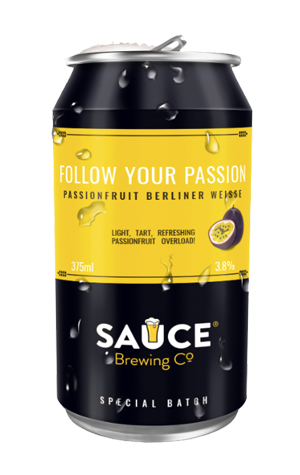 Want to know how to get a brewery to brew, package, and sell your beer?

Step 2: Get a job at a brewery. Chris went on to work the canning line at Sauce Brewing. His beer had caught the attention of the Sauce Brewing team, so it was only a matter of time before they suggested he brew a batch of it for the whole country to enjoy.

Step 3: Put in all the passionfruit you can get your hands on. High wheat content and a crazy amount of passionfruit make this beer unforgettable. It pours cloudy with a fluffy white head, with a surprisingly delicate aroma: the soft, sweet, and creamy passionfruit aroma is like a face full of fresh pavlova. But the full force of the passionfruit's tart side hits once you start drinking, with lemon and passionfruit sourness distorting your face from the very first sip. While this all sounds incredibly intense, it’s somehow drinkable and cleansing rather than overpowering.

And that’s how your homebrew gets into cans and onto taps around Australia.