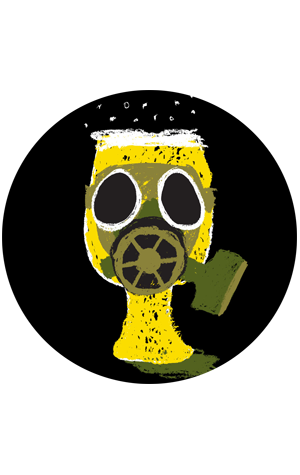 So, who is the Funky Menace? Many, many things it turns out – most of them microscopic.

On the surface, the beer is an India saison brewed by the Wheaty Brewing Corps and Fixation, one that combines the former's fondness for funkier styles with the latter's obsession with all things hops. But scratch the surface and you'll find quite the tale.

The mixed culture with which the beer was brewed is one that has many parts, a combination of the Wheaty Brewing Corps' French saison-based house culture, Wildflower's ever-evolving beast(ies) and Bridge Road's Brett C culture. From the Fixation side of things, a hefty dose of Motueka, Citra and Enigma hops were added to a pretty full-bodied affair. And, completing the picture were coriander seed, pink grapefruit and orange peel.

The result, at least upon tasting in its early days, is a fruity, zesty affair, with plenty of sweet, citrusy character and hop aromatics that keep the funkier, menacing side of the beer relatively under wraps. One assumes that, as time passes and the hop character recedes, the horde of little creatures in its belly will only add more complexity.