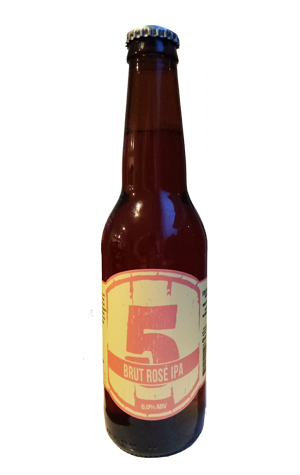 Sometimes inspiration can strike from the most unusual places. For a while, Five Barrel founder Phil O'Shea had been trying to get a change approves at the brewery bar to allow him to serve proper glasses of beer rather than “tasters”, and start selling wine as well. He finally got his wish not long before the brewery’s third birthday.

One of the wines he chose to stock was a rosé from a Canberra area winery, which he thought was exceptional and inspired him to make a beer version as a birthday beer. That, combined with a desire to dabble in the Brut IPA trend, led to his Brut Rosé IPA.

The crimson colour comes from the addition of several kilograms of hibiscus flowers (sourced with the help of Sam Haldane from Shenanigans), dunked into the fermenter like a giant tea bag. The result is a beer that really does resemble a dry, sharp rosé. There’s a light floral tone on the nose, courtesy of some Ella hops, but it’s the colour from the hibiscus and the dryness that are really the stars of the show here.