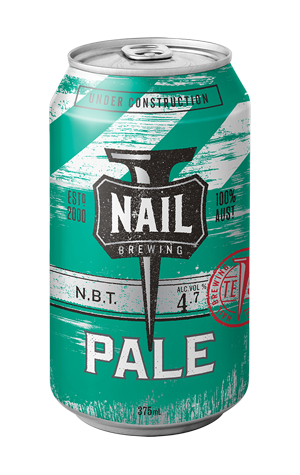 Twenty years after John Stallwood’s original Nail Brewing Test (NBT) development series coalesced into his brewery’s eponymous debut, Nail Ale, he's still playing in the brew shed. Sure, the "shed" is now considerably different to the place where the test brews conducted at the University of Ballarat took place, yet the creative sensibility remains.

NBT Cashmere is a series opener, which aims to explore New World hops and pale ale recipe development each month before culminating in the release of a new Nail Pale or Nail Ale - the semantics of which may take the best of the year to finalise - just in time for the brewery’s twentieth birthday in 2020.

Here, a little known hop, Cashmere, takes the lead with some support from classic Nail varieties. A relatively new variety, Cashmere is described as "super-Cascade", with suggestions of citrus, notably tangerine, lemongrass and herbal notes. These are evident in NBT, however the combination of supporting cast fills out the profile with some light tropical and grassy aspects upon the medium body and bitterness.

As John puts it, it’s a beer for the crafty drinkers as well as for everyone else.

Launching April 5 in WA, with the East Coast to follow.