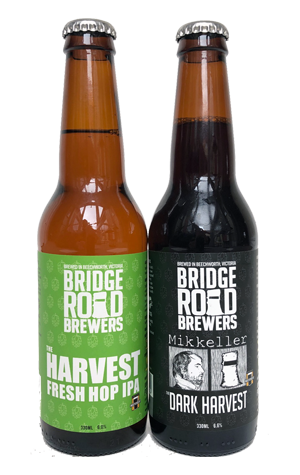 Bridge Road's fresh hop twosome have become as much part of the annual hop harvest in Australia as the hops themselves. While scores of brewers across the country release all manner of fresh / wet hop beers these days, nobody has been releasing them every year for as long.

The Beechworth brewer started out with a single Harvest Ale before adding the Dark Harvest – originally brewed with Mikkeller overnight – and then boosting the former to become The Harvest Fresh Hop IPA. Due to timing and availability, in 2019 the IPA features a mix of research varieties in conjunction with Galaxy, with Dark Harvest returning to HPA's 016 variety, now in commercial production, alongside Vic Secret, a hop that was destined for the chop until it appeared in an early Harvest Ale.

Starting with the Fresh Hop IPA, first up it's kinda refreshing in these days of haze to be met by an almost clear golden beer, one with a cloud like head that presages the fluffiness of the beer on the palate. There's soft, sweet honeydew melon and a little citrus at play, and not too much in the way of bitterness. Dig deeper and you might pick up a hint of liquorice or something a bit herbal in there too (we couldn't agree on what to call it at Crafty Towers...).

HPA-016 has been tagged Australia's answer to Citra, although in the 2019 Dark Harvest (which is also pleasantly fluffy on the palate) it's Mikkeller's layered malt bill and the Vic Secret that seem to lead the way: there's plenty of soft roast and dark choc, even a hint of leather, in this opaque dark brown drop. Hops wise, it's more pine than anything else, with a drying, herbal finish.