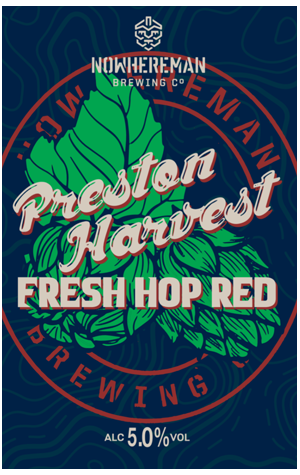 Autumn’s arrival marks the harvest for many crops, not least hops. Nowhereman’s team took this opportunity to work with Preston Valley Hops, two hours South of Perth, and hand-picked 25kg of Cascade and 7kg of Victoria hops to celebrate the lupulin magic of the female flower. While Cascade is well known and considered to have played a pivotal role in launching the modern craft beer movement in the US, Victoria is a relatively unknown breed that was abandoned by Hop Products Australia only to be kept alive by homebrewers. It's described as having peach, loquat and mango characters, a tropical theme that;s unsurprising given it’s a sibling of Galaxy.

The fresh hops were driven straight to the brewery and added to the hot wort of a beer head brewer Eddie Still says wasn't based upon a defined beer style, instead one designed to work the nuance of the fresh hops. The result sits close to red ales, yet there’s a creaminess at play along with some rye spice, citrus and grassy hop characters, as well as a dry and lasting bitterness.