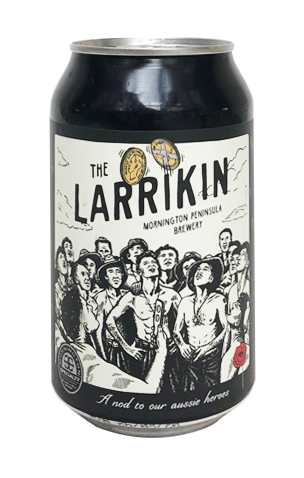 Every year, as Anzac Day approaches, you'll find a few breweries creating beers to mark the occasion. And, in 2019, Mornington Peninsula Brewery has put theirs out in cans too. Larrikin ticks the requisite boxes on the outside, with the name joined by an image of bare-chested soldiers playing two-up and a poppy there for good measure too.

As for inside, well, they used all the ingredients that go into the biscuits of the same name in an amber-hued beer that comes as quite the change after a summer where pretty much everything has been pale and hazy or somewhere between pink and red. While the coconut didn't appear to be as prominent as the cans suggest, there's much in the way of biscuit characters, from a syrupy cake like vibe to some toasted nuttiness and a lingering sweetness just about given a semblance of balance by the gentle toasted finish.