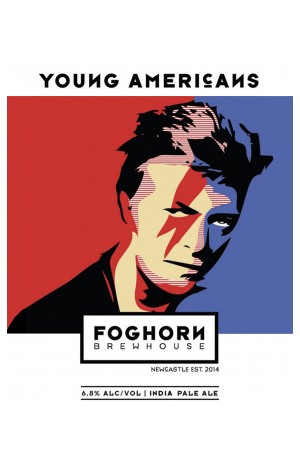 There was a time when you were unlikely to find FogHorn founder and head brewer Shawn Sherlock use anything other than hops from New Zealand. Scour the beer world for opinions on Kiwi hops and you'll find a broad spectrum of responses yet he found he could achieve an array of results without needing to look elsewhere.

He's loosened the shackles (a little, at least) since launching his brewpub, with Young Americans adding Simcoe and Citra from the States to the mix. It seems to have paid off as the beer swiftly notched a gold at the country's largest beer awards in 2017.

The hops weren't so much added to the beer, either, as injected into its very DNA: Young Americans comes mash hopped, first wort hopped, whirlpool hopped, has fresh hop flowers added in the hopback, dry hopped… The result is "hazy and unfiltered US craft-inspired hop juice" dedicated to the late, great David Bowie: “All night! She wants the Young American.”