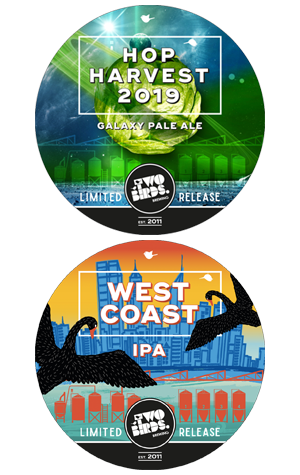 It’s all about hops at the Two Birds Nest as they launch a pair of hop dominant beers to celebrate new beginnings. The first, Galaxy Hop Harvest, is a 5.3 percent ABV pale ale made with new season hops. It is lean in malt, and all about the wet, unprocessed hops from the 2019 Australian harvest.

The keg-only release is bright yellow, with fresh cut grass and white peach aromas. It has an oily-fresh and luscious mouthfeel, finishing dry, with a solid bitterness. Using Galaxy hops in a pale ale might be a bit of an Australian cliché these days, but this sets itself apart from other Australian versions with a much firmer bitterness than we have come to expect.

The other, also keg-only, is a 6.3 percent ABV West Coast IPA featuring Ella, Cascade, Galaxy and Citra hops. It's been brewed as a nod to Danielle Allen’s (one of the two founding Birds) move back to West Australia (on the West Coast… get it?). Slightly darker than the Hop Harvest in colour, it comes with a bruised kiwifruit and sweaty mango aromas, while the flavour is fresh tropical fruit and the finish sharp, dry, and excellently bitter.

Neither of these shy away from bitterness and are both much better for it.

NB These are Hop Harvest stockists