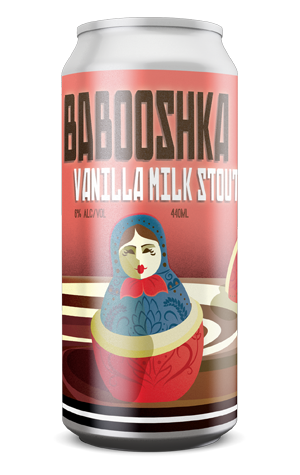 Well I never. A Hargreaves Hill beer in a can. Having tested the waters with the Beatnik beers, here's the first tinnie bearing the Yarra Valley brewery's name. It adorns 440ml cans of a beer that initially appeared as a very short, draught-only run in 2018 when Hargreaves Hill took over the very many taps at the Mt Macedon Hotel for a special event.

Babooshka is a vanilla milk stout whose arrival is rather timely, not just because we're heading into winter but also because we're in the midst of the ever-growing series of GABS festivals, which was the place where such sweet, often dessert like stouts first appeared in front of many drinkers.

The vanilla and lactose (milk sugar) combine to conjure memories of marshmallows, while also smoothing out any semblance of the sharp, roasty edges you might expect to find in a straightforward stout. The effect is to create a sweet, almost gooey dessert stout experience, one to be supped by a fire. Marshmallows optional.