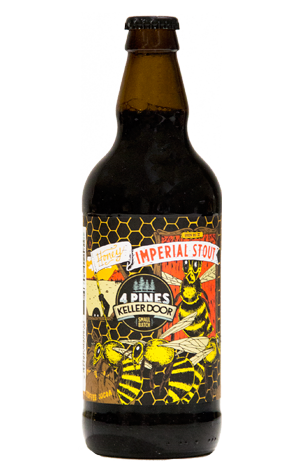 Fans of 4 Pines’ Keller Door releases may recall the Black Box of Dark Ales from a few years back, consisting of four different beers brewed with dark malts. As winter 2019 approaches, they’ve brought back one of the most popular of the four: the Imperial Stout, but this time with an interesting twist. Inspired by the tale of a honey stout produced by the old Brookvale Brewing Company, once housed just down the road from 4 Pines’ current headquarters, the ever-experimental brewers combined their Imperial Stout recipe with 300kg of freshly-harvested, natural honey from independent producers Paxton Honey in the Hunter Valley.

Pouring thick, with a deep brown hue, the beer is heavy enough to be a proper winter warmer, whilst still being light enough to drink an entire bottle. It’s abundant with flavours of dark chocolate and toffee, with a touch of honey that’s just enough to erase any lingering bitterness from the roasted malt. Yet the sweetness isn’t cloying; in fact, the finish is perfectly dry, leaving behind only the desire for another mouthful plus a touch of bitterness, just like a piece of dark chocolate itself.

At 9 percent ABV, it hides its alcohol content surprisingly well, thanks to the excellent balance between bitter and sweet that work to disguise each other. With ageing a possibility, this is a beer that can be enjoyed both now and well in to the future – or how about both?