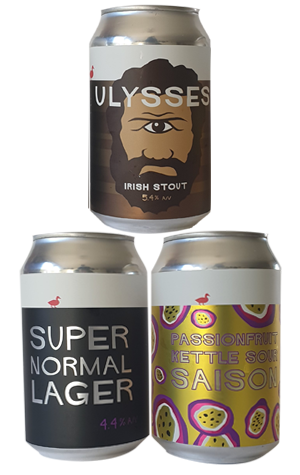 Red Duck have never been shy when it comes to exploring different beer styles from across both the world and history and this trio of releases from the Ballarat brewery sees them doing exactly that. After all, what could be more fitting in a beer world moving in so many different directions at once than releasing a lager, a kettle sour and a dry Irish stout all in cans at the same time?

The first of those, Super Normal Lager, lives up to its name: an everyday, garden variety lager. There are some light floral notes in there, and a breadiness from the malt held against a decently bitter body.

Decidedly not normal is a reasonable way to describe the Passionfruit Kettle Sour Saison, for which the brewery mixed a lacto bacillus-laced beer with a base saison then added a kick of passionfruit. There’s lots of that passionfruit flavour in the mix with a light tartness set against a more yeast-driven, estery backdrop.

The final of the trio is Ulysses, the brewery’s returning Irish stout with a name inspired by the James Joyce novel, rather than the Roman name for the Greek hero played by British actor Sean Bean in the 2004 American film Troy [OK, trivia boy. That's enough – Editor]. Like its previous iteration, it pours jet back, with the focus of the flavours being roasted and dry notes, akin to a particularly dark block of chocolate.