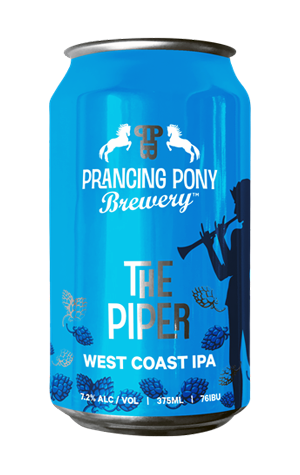 In this era of new, new, new, you see more and more beers hit the market once and once only. You have to question what this says about overall quality as no brewer can expect to nail every beer they attempt first time, but it does seem to be what retailers and drinkers at the pointier end of the beer world demand. The Piper, however, is not one of those beers.

A few months ago, Prancing Pony released a batch of beer called E1. It was a West Coast IPA and, once they had feedback, they tweaked the recipe to create E2. A further round of revisions later and E3 – or, The Piper as it's become – was released just before Good Beer Week 2019 and is a reminder of the benefits of taking time over what you do.

So called as a nod to The Pied Piper story, albeit with hops instead of music and with a less unpleasant outcome, as well the head brewer's choice of music while brewing the beer – Jethro Tull and flutist Ian Anderson – it's a cracking balance between citrusy and piney hops, a solid biscuit and caramel malt backbone and a firm, lingering bitterness. Upon sampling it on tap, the immediate reaction was that here was a beer Prancing Pony should put into cans. And it turns out they are too, with the first ever tinnies from the Adelaide Hills brewery following the kegs from May 20.