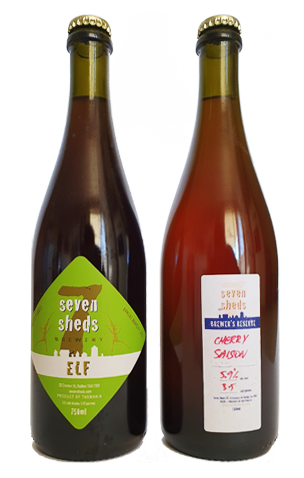 If you've followed the Seven Sheds story in any way over the years, you'll know they enjoy telling the tales and celebrating the flavours of their home in Tasmania's north-west. Sometimes, those flavours are drawn from their own brewery and hop garden; sometimes they're sourced from neighbours. These beers do both.

ELF is an annual release that makes use of freshly harvested homegrown hops, including the Leggett variety Willie Simpson has helped keep in commercial use, although unlike many harvest ales that keep the other elements restrained in order that the hops shine unhindered here they're put to work within a hearty ESB (English Special Bitter). The 2019 batch reminds me of Old Hooky, the flagship ruby red ale from Hook Norton in England. Rich toffee and treacle like malts with raisin undertones and a little chocolate / cocoa form a chewy base upon which you'll find hints of floral, earthy hops.

As for Cherry Saison, it's another annual release, in this case brewed with the juice of locally-sourced cherries. This year's vintage pours a hazy, blood pink – certainly, it's taken on more colour than some past releases we've tried – that presages plenty of soft, slightly tart berry characters. It's floral and lightly spicy, with a touch of straw on the nose too. Flavour wise, the cherries come across a little like the cherry medicine you'd have as a kid, while the saison yeast character builds as it warms, ensuring a dry end to proceedings.