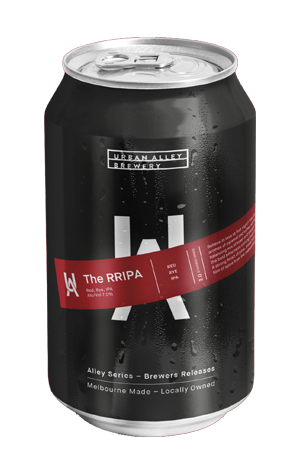 With their sweet yet often reasonably light malt body and a decent whack of flavour sourced from the hops department, red IPAs naturally feel like the kind of beer brewers should release in autumn: a bridge between the lighter, flightier beers of summer and the brooding ales of winter. And that’s precisely what Docklands’ Urban Alley have done as part of their Alley Series, which sees the brewery’s limited releases make their way into the world in rather eye-catching jet black tinnies.

Not content with brewing a red IPA, however, Urban Alley also added a dash of rye to the malt bill, giving the beer an extra spicy kick. Alongside that spice there’s some sweet toffee and toast-like flavours and, while the hop flavours are a little more restrained than what’s dished out by the malt, there's some gripping pine and blackcurrant to be uncovered and a fairly bitter backbone too.