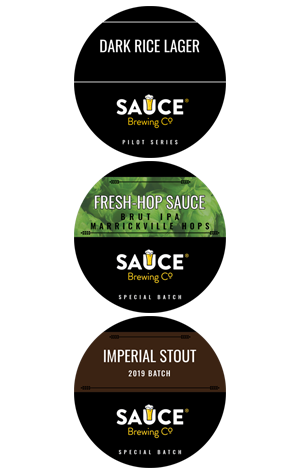 As much as we love our dark beers when it’s cold, it’s still important to have sessionable quaffers to keep us going on those long winter nights. The Dark Rice Lager brings floral, herby, and bready notes to the table, and carries a complexity that summer lagers aren’t interested in. The dark malts in this whippy little number give a reddy brown hue, as well as a hit of dry fruit and toffee, but the 30 percent of rice making up the grain bill keeps it from getting sticky.

After a couple of dark lagers, you might be ready for an IPA to give your taste buds a jolt – especially when there are wet-hopped options to be tried. This year’s version of Fresh Hop Sauce is a Brut IPA, with fresh Enigma flowers from Tasmania in the whirlpool bringing tropical fruit and a little spice. But, while this is a tasty drop, the real prize came when the brewers took part of the batch and dry-hopped it with hops grown in the brewery’s beer garden. Sweet pineapple, floral, and apple notes give this small batch an almost cider-like quality. The oils and resins from the new hops did away with some of the dryness, making this Brut IPA a little less brut-ish, but no one is complaining about the end result.

When you’re shivering at the end of the night and ready for your last beer, there’s no competition – with a blackness that snuffs out the light, the 2019 Imperial Stout is a bedfellow like no other. Each sip envelops your tongue with syrupy chocolate, as promised by the dark tan head on the beer. The liquid sticks to the side of the glass like an oil spill, so don’t be surprised when that same stickiness coats your mouth, sharing hints of smooth dark fruit before descending into a warm, roasty bitterness. And remember: this is definitely your last beer, so make it count. Well, maybe it’s your second last.