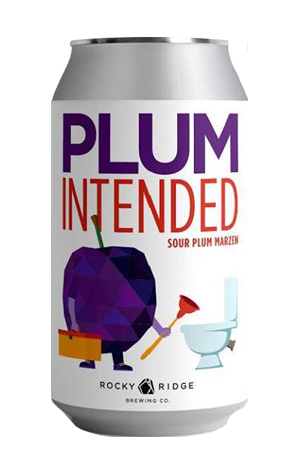 Collaborations, sours, puns and rejected fruit... Just a few things Rocky Ridge won't shy away from and have successfully been serving up to punters since their beers first hit taps in 2017.

This beer is one that ticks all the aforementioned boxes but, in classic Rocky Ridge fashion, it's a beer like no release before it. This fruity, punny, sour collaboration was brewed with the team at the Royston Hotel in Richmond and is loaded with 150kg of not-supermarket-worthy plums, and the can is embellished with a plum and toilet (plum(b)ing), but that's where the jokes end, because this beer is serious. Seriously tasty.

Plum Intended is well balanced with high acid and minimal hop character, brewed to just 4 IBU. What it might lack in hops, however, it overcompensates with on the plum front. Bucketloads of fresh and stewy plums are present on the nose and palate, a combination that makes this release range yet another pleasingly acidulous Rocky Ridge beer designed for sipping and fruity refreshment.