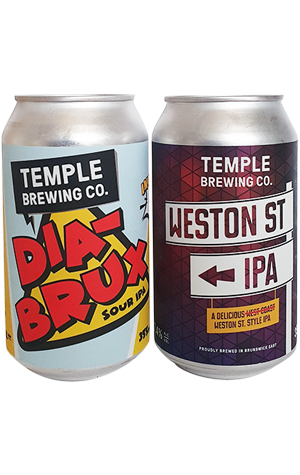 Just before winter kicked into gear, Temple Brewing released two new IPA cans that couldn’t be much further apart in nature from each other. The first, Dia-Brux, was brewed for GABS 2019 and, in true festival fashion, it’s a sour IPA making full use of some of the most hyped brewing ingredients du jour. Hopped with Mosaic, kettle soured with lactobacillus and featuring Belgian yeast strain Saccharomyces Bruxellensis Trois, one that’s used for funkier ferments, it ticks all the right boxes to be on “fleek”.

Whether on fleek or not, it’s certainly got lots of fruity funk too it, with ripe mango and orange juice leaping from what's quite a tart underlying beer.

By comparison, Weston Street IPA is a decidedly more straightforward affair: a West Coast IPA named after the street Temple upon which sits on. Brewed with a mix of US hops Ahtanum, Simcoe, Chinook and Cascade, there’s a big whack of pine up front, with citrus and floral flavours following close behind. But it wouldn’t really be America’s West Coast brought to Brunswick’s eastern fringe if it wasn't big on the bitterness front and in that regard it delivers in spades too.

NB: Such was the popularity of Weston St, that it's since been moved to the brewery's core range.