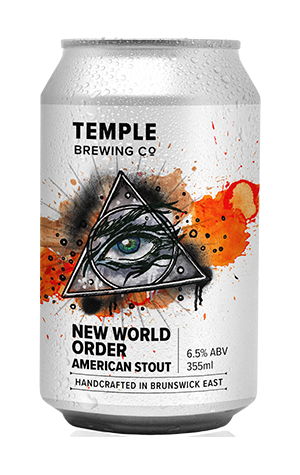 New World Order is a stout that’s been a regular released from Temple for years, originally created by the stout-loving former head brewer Glenn Harrison, a man who's been known to claim he'd love little more than to open a stout-only brewery. Opaque, and American-influenced (in other words, more heavily and punchily hopped than your traditional stout), it joined the brewery’s core range when the lineup was revamped. And, like the rest of Temple's range, it's been moved into cans ready for winter 2019.

The liquid inside the can is exactly what you'd have found in the bottle, so as you crack a tinnie expect a mix of citrus, berry and pine from the hops, with the malt bill delivering roasted notes from and a nutty, cacao-like finish.