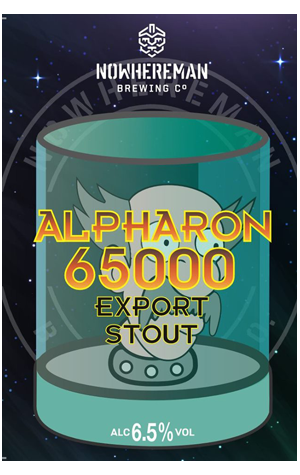 Nowhereman owner Reece Wheadon’s dad, Ron, had been asking for this for years. He’d even suggested a name: Alpha Dog, a solid name for a winter stout – something honest and dependable to represent a classic beer style.

Except the brewery team thought it would be way funnier to name it AlphaRon, add 65000 for more hilarity, then put Ron’s head in a glass jar on the decal in a Futurama-like expression. Have children, they said… It’ll enrich your life, they said…

AlphaRon 65000 is a straight up stout: it's uncomplicated, welcoming and thus almost life-affirmingly simple in a complicated world. Indeed, during sampling for this write up, various members of the Nowhereman team gravitated to the bar, culminating in the unanimous declaration: "Isn’t stout great!"

Coffee, dark chocolate and a little liquorice all feature in dry finishing beer that’s very moreish. In fact, the only complication with this beer is that, somewhat ironically, AlphaRon 65000 isn’t exported. That said, Ron didn’t seem to mind the quick trip across town to enjoy his eponymous beer; after all, he’s been waiting years for this.