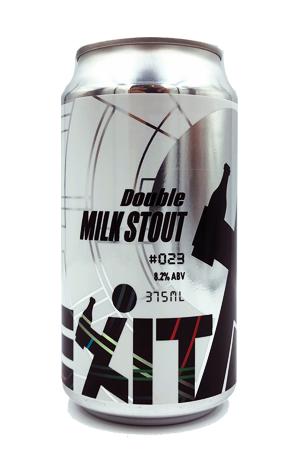 Given the vast and growing number of brewing companies in Australia plus the scores that send their beers to Melbourne to be judged every year, it's becoming tougher and tougher to pick up a trophy at the Australian International Beer Awards. There are many fine brewers out there who will never take to the stage to pick up a Best Beer or Champion Brewery trophy. Yet Exit Brewing have managed it not once but twice.

At the 2019 AIBAs, brewer Grum was called to the stage to collect the Best Stout trophy for their Milk Stout, just two years after their Amber earned them their first win. There's not many brewing companies out there with an amber ale or a stout in their core range, let alone both, so it's quite something to have both rated the best at one of the world's biggest beer competitions.

Which is a rather long-winded way of getting to #023, the winter 2019 release from Exit that pays tribute to their latest win by taking the Milk Stout and going bigger. Packing 3 percent more booze, it's a soft, sweet and chocolaty companion piece. There's milk chocolate on the nose, a more couverture like variety to taste – albeit with a softening fullness – while even the coffee elements are of the richer, sweetened sort. All in all, it feels like a stout spider in waiting.