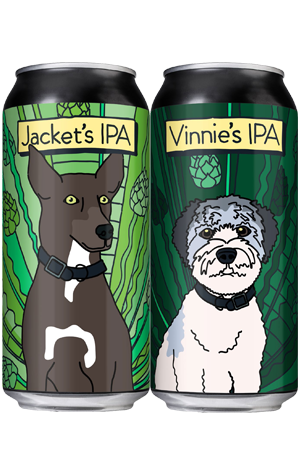 Their association with the canine world has long gone beyond the brewery name and roaming brewery dog. There's been sponsorship of various dog-related events and now both a series of IPAs named after dogs with a connection to the brewery and Doggy Adoption Day at the brewery on June 16.

The day will also see the launch of two more Doggo IPAs, both brewed with Norwegian "super yeast" kveik, which saw the beers fermented in just 48 hours (in layman's terms: insanely fast). Jacket's is a West Coast style IPA featuring Azacca, Mosaic and Simcoe hops: a lightly hazy copper beer with pine forest aromas for miles and a little blackcurrant and grassy hop cone character for company. Taste wise, toffee malt, a hint of berries and liquorice plus a rounded, drying bitterness complete the picture.

As for Vinnie's, it's another step into the realm of the hazy, although, like other kveik'd hazy beers we've come across – Ocho's Happy Place, for example – it's less hazy and more densely turbid. With a head so thick it's like peering at meringue, it looks rather like lemon meringue pie in the glass, yet it's a long way from being such a GABS-esque dessert beer in character: danky and weedy initially before revealing some intense, stewed tropical/peachy/citrusy aromas flavours. Add in a distinct oily, gripping bitterness and you land in a place a hefty stick throw away from the fruit juice-masquerading-as-beer of many of Vinnie's hazy peers.