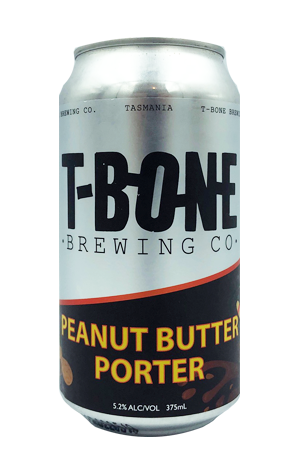 You wait years for a chocolaty peanut butter beer to come your way then, whaddya know, two land on your doorstep in two weeks...

Following hot on the heels of Barossa Valley's Peanut Butter Chocolate Milkshake comes this porter-with-a-twist from Hobart's T-Bone. And, such was the response to its launch, a second batch was already being brewed by the time the first reached Crafty Towers.

Like its SA companion, the beer leaves you in no doubt it's a nutty one. If anything, the crushed nuts aroma – like those you'd have had sprinkled on an ice cream sundae - is more potent here, while they haven't held back on the base beer either; it's a viscous, chocolate-heavy porter with dark caramel / borderline treacle syrup characters playing a supporting role too. One for the sweet-toothed among you.