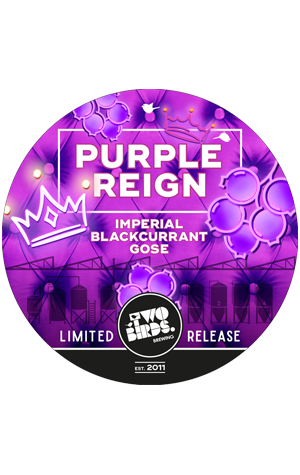 I never understood the meaning behind the phrase “going through a purple patch”, but Two Birds Brewing is undeniably in one, if at least literally with two purple-labelled beers released to coincide with their eighth birthday.

One is a new core range IPA you can read about here, the second an imperial gose with blackcurrants that's even more purple because, behind the purple branding, is a purple beer. The currants, 200kgs worth, were initially destined for the bin, but with the help of Yume Food, they helped create the deep purple liquid.

The fruit gives you waves of jammy fruit aromas, which are neither sickly nor sweet. There is a touch of sweetness in the beer itself, but it’s quick to dry up before things get too cloying. The saltiness hums away in the background and it’s only really noticeable if you go looking for it. It’s pleasantly tart, but not bracingly sour.

The total package is a tasty experience that drinks far easier than the 8 percent ABV would suggest – so easy, in fact, that it’s bound to catch a few people out, so be careful out there.