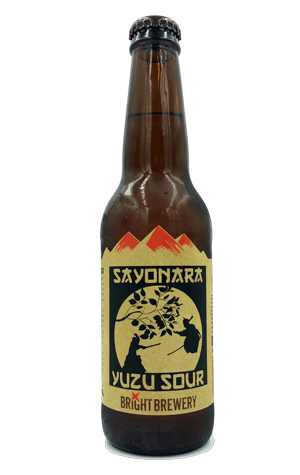 Bright Brewery join the ranks of the local brewers to have fallen for the bright and zesty charms of Japanese citrus fruit yuzu. They've opted to showcase it within a sour beer, which might not be the most obvious move heading into winter (especially winter in Bright) but they tell us it's because the Japanese like to bathe in yuzu baths on the winter solstice.

Now, you'd need to buy a lot of Sayonara to be able to bathe in it, but will you want to? Unless you're yet to be won over by the charms of fruity sours, probably not, as you'll likely want to wallow instead in the pronounced yet lean and clean citrus aromas and its clipping sour sherbet tartness. Indeed, the sourness is more redolent of sucking on a citrus fruit than something created solely by lactobacillus during a brew so, while winter may seem an odd time for such a beer, we reckon it will deliver refreshment whenever you knock the top off a bottle.