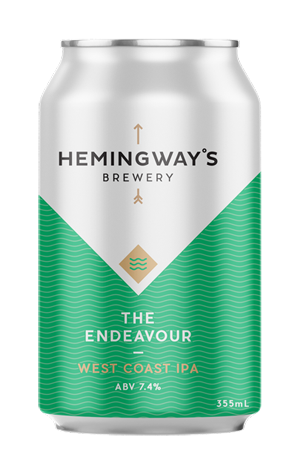 A West Coast style IPA brewed on the East Coast and named after the ship that carried a Northern Hemisphere explorer around the planet, The Endeavour was part of Hemingway's strong showing at the 2019 Australian International Beer Awards, collecting a silver not long after being added to the brewery's lineup.

Despite being based around just two American hops – Simcoe and Mosaic – it welcomes you with a multifaceted hop aroma (well, one of them is Mosaic, after all), one that travels from sweeter and citrusy to piney to sharper and more tropical in character. A malt bill featuring Munich and Rye ensures there's enough sweetness to keep bitterness in check in a beer that drinks easier than its ABV might suggest.